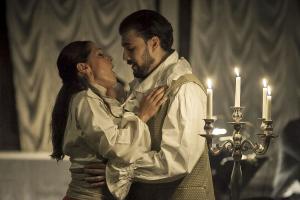 Could there be a better opera than Rigoletto for the brilliant ensemble of musicians known as Musica a Palazzo to perform? It has everything: the element of surprise; deceit, scheming and treachery; fickle lust and filial love; and supreme moments of comedy in the most heart-wrenching tragedy that Giuseppe Verdi and his librettist, Francesco Maria Piave, ever wrote.

Musica a Palazzo has no need for a theatre or a stage: its productions are mounted in Venice’s magnificent Palazzo Barbarigo Minotto, moving the audience from room to room and enveloping it in the drama as it unfolds. The effect of watching opera like this is spellbinding. Being so close to the cast results in an experience that etches itself into the memory: a night at the opera like no other.

Verdi compared Victor Hugo’s play Le Roi s’amuse, which provided the inspiration for Rigoletto, to Shakespeare, while Hugo on seeing the opera was struck by how much Verdi’s music had added to the emotional impact of his story. It is quite simply one of the most complete works in the genre.

The character of Rigoletto is equally astounding: a hunchbacked court jester who panders gladly to his master’s every whim, but who is also shown to be a devoted father. Then we witness an astonishing transformation: when he discovers that the frivolous Duke of Mantua intends to bed his daughter, Gilda, Rigoletto’s thoughts turn to murder.

Premiered at the Gran Teatro La Fenice in Venice on 11 March 1851, Rigoletto was at risk of invoking the wrath of the state censors, who despaired of its composer’s apparent readiness to contravene their rules regarding any unfavourable portrayal of the monarchy. Removing the action to the distant sixteenth century and a dukedom that had long gone saved the day.

We can be thankful that the opera survived if not indeed grateful for the censors’ strictures that dictated the era in which it was originally set. The Palazzo Barbarigo Minotto, together with its wonderful paintings and furniture, and with a history that spans the Italian Renaissance to the final years of the Baroque, effortlessly transports us back in time to the world of Rigoletto.