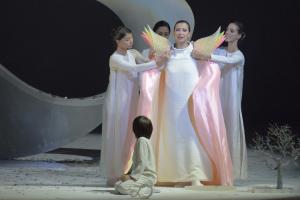 Will we ever tire of Giacomo Puccini’s Madama Butterfly? The story of a young geisha’s love for an American sailor continues to bewitch us just as it did its composer. When Puccini, during a visit to London, saw David Belasco’s play Madame Butterfly, he decided the moment he had left the theatre that this was a tale he had to set to music.

Madama Butterfly is as much a cultural as it is an individual tragedy. Cio-Cio-San endures the scorn of her family by keeping faith that her American lover and husband, Lieutenant Pinkerton, will come back to her. But when the day arrives, Pinkerton returns only to claim his infant son.

Like us, there can be little doubt about where Puccini’s sympathies lay. He reserves his most beautiful music for Cio-Cio-San, no more so than in the opera’s standout aria “Un bel dì, vedremo”, whereas Pinkerton’s entrances are more brusque and bombastic.

Puccini lavished the utmost care on the work. Together with his established team of Luigi Illica and Giuseppe Giacosa, who had written the librettos for La Bohème and Tosca, he was exhaustive in his research, determined to ensure that his melodies would be infused with a Japonism that was utterly authentic. His concern however was not just aesthetic: he urges us to peel back the layers of Cio-Cio-San’s costumes and makeup to find the pure and innocent girl underneath.

The premiere of Madama Butterfly at La Scala in Milan on 17 February 1904 was poorly received. It must have been a galling experience for Puccini after all the effort he had poured into it. Rather than despair, he set about revising and improving the work to see it triumph in Brescia three months later. It went on to become a huge international success. Buenos Aires, London, Washington DC, New York and Sydney swiftly followed, each city succumbing to Madama Butterfly’s charms.

Now staged by the Gran Teatro La Fenice in Venice, in two acts as Puccini originally devised it, Madama Butterfly continues to hold us in its grip not just by offering us a tantalising glimpse of an often misunderstood culture but also because of what it reveals to us about ourselves.