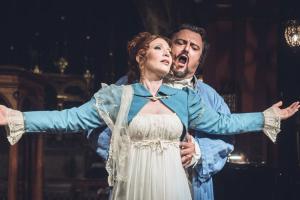 Giacomo Puccini’s fascination with doomed heroines immediately made him fall in love with Victorien Sardou’s play La Tosca, which he saw in 1889. Ever since then, he relentlessly pursued the goal of turning the French play into a classic Italian opera. Copyright negotiations, rival composers, reluctant librettists, and political censors would continuously hinder the project, but the maestro persevered. Finally, Tosca debuted at Teatro Costanzi in Rome on 14 January 1900 to lukewarm critical reviews but complete popular adulation that continues to this day. Puccini’s fantastic arias, the fast pace of the action, and the sudden twists and turns in the plot all but guarantee the work an evergreen status in the repertoire. This season, Teatro Aurora in Florence-Scandicci revives the classic opera vera.

Even though Victorien Sardou was sceptical of Puccini’s compositional ability and his librettists Luigi Illica and Giuseppe Giacosa’s skills to convert his dramatic text into a workable scenario for an opera, the musical adaptation of his play La Tosca vastly surpassed the original’s popularity. It would also be a major step in establishing the Maestro’s trademark style of ‘verismo’, whereby the on-stage action unfolds in nearly real-time. The infectious realism of Tosca, combined with its incendiary subject and setting, proved both a blessing and a curse: audiences were mesmerised, but censors postponed the premiere by a day for fear of riots. Indeed, the opera’s action unfolds in Rome, a city under siege by Napoleon’s army and slipping away from the Kingdom of Naples’ control.

At the heart of the plot is the beautiful, vain, and capricious singer Floria Tosca. Oblivious to the delicate political and military situation, she lets jealousy cloud her judgment and unintentionally betray her lover Mario Cavaradossi and his revolutionary friend Angelotti to the ruthless police chief Scarpia. Events spin out of control, and love, rebellion, torture, murder, and suicide all fuse into a rollercoaster plot that has kept audiences on the edge of their seat for over a century. To carry the action forward, Puccini composed some of his most famous arias, including Floria Tosca’s ‘Vissi d’arte’ and Cavaradossi’s ‘E lucevan le stelle’ and ‘O dolci mani’. In Firenze-Scandicci, this verismo masterpiece lives on.