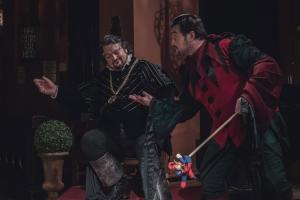 Giuseppe Verdi was a lover of literary classics and turned them into operas with inimitable skill. His reverence towards the source authors shone clear in each note, and the intense drama Rigoletto is no different. Based on the highly controversial play Le Roi s’amuse by Victor Hugo, the classic Italian opera takes aim at the depravity of aristocratic courts and the dangers of indulging the immoral habits of the nobility. Much like the original dramatic text, Verdi’s Rigoletto clashed with royal censors repeatedly until it was allowed to be staged. The premiere at La Fenice in Venice on 11 March 1851 was a rousing success, thanks both to the gripping story and the rich, engaging score. This season, Rigoletto charms and shocks on the stage of Teatro Aurora in Florence-Scandicci.

The original title of Rigoletto was La maledizione, or The Curse, and the plot reveals why: The Duke of Mantua is a serial womaniser who has no qualms bedding the wives and daughters of his own courtiers, and his court jester Rigoletto always encourages him and mocks the scorned families viciously. After yet another tryst, the wronged father places a curse on both the Duke and his accomplice. It finds its shocking resolution when Rigoletto’s own daughter Gilda falls in love with Mantua, who tricks her into believing he is a visiting student. The court jester is so angered that he hires a killer to rid himself of the suitor – but his years of enablement and mockery of his master’s victims will surely not go forgotten. The plot twist delivers justice and is easily among the most shocking reveals in opera history, made even more powerful by Verdi’s inspired music.

The score of Rigoletto is full of legendary melodies, but none more famous than ‘La donna è mobile’, the playful Act One aria by the lascivious Duke of Mantua. After the triumphant premiere at La Fenice, audiences were singing that very melody the next morning. At Teatro Aurora in Firenze-Scandicci, Verdi’s infectious melodies will ring in opera lovers’ ears once more.