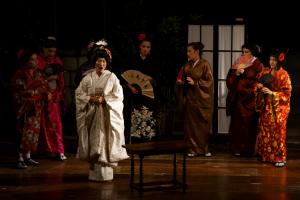 Giacomo Puccini knew how to elevate a melodramatic story into an impactful, heart-wrenching tragedy without a hint of overbearing. Madama Butterfly is one of several high points in the Italian composer’s career, and it remains one of his most beloved works in the operatic catalogue. The original premiere of the opera in two acts took place on 17 February 1904 at Teatro alla Scala in Milan and was close to a disaster, mainly due to Puccini’s last-minute completion of the score, which left very little time for proper rehearsal. After the initial disappointment, the Maestro revised Madama Butterfly, separated it into three acts, and earned glowing accolades with it, starting with the second premiere in Brescia on 28 May of the same year. This season, Teatro Aurora in Firenze-Scandicci stages a faithful revival of the classic opera.

Puccini’s inspiration came from catching David Belasco’s play ‘Madame Butterfly: A Tragedy of Japan’ in London in 1900. A connoisseur of tragic love and doomed heroines, the Maestro immediately fell in love with the title character Cio-Cio-san. Soon after, he got together with frequent collaborators Luigi Illica and Giuseppe Giacosa, who produced the Italian libretto. For the score, Puccini immersed himself into the folk music of the Far East and North America, using distinct ethnic elements and modes for the Japanese and American characters. The orchestral interludes as well as the ‘Humming Chorus’ are also among Puccini’s most innovative musical ideas, but nothing compares to Cio-Cio-san’s heartfelt aria ‘Un bel di vedremo’.

The story of Madama Butterfly focuses on the relationship between Cio-Cio-san, a young Japanese girl, and U.S. Navy Lieutenant Pinkerton. She is in love with him, while he sees her as just another easy conquest during his tenure overseas. Shortly after they are wed, Pinkerton departs, while Cio-Cio-san is left waiting for his return. Even years later, she remains faithful and hopeful. When he finally shows up, however, their reunion is nothing like what she had imagined. Audiences at Teatro Aurora in Firenze-Scandicci are in for an emotional rollercoaster.