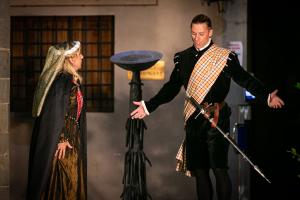 At the time of writing Lucia di Lammermoor, Gaetano Donizetti was at a creative and popular high in his career. His top spot among the masters of Italian opera was beyond doubt, and audiences’ interest in Scotland as a romantic, belligerent, and mythical place pointed the composer towards the historical novel The Bride of Lammermoor by Sir Walter Scott. Salvadore Cammarano prepared an Italian libretto loosely based on Scott’s harrowing original, and Lucia di Lammermoor had its premiere on 26 September 1835 at Teatro di San Carlo in Naples. The opera was very well-received, and its ‘mad scene’ quickly became the gold standard, which scores of future composers would emulate but never best. Lucia di Lammermoor has been a regular title on many theatres’ bills year after year. Teatro Aurora in Florence-Scandicci stages a revival of the classic Donizetti drama this season.

The plot of Lucia di Lammermoor focuses on the impossible love between Lucia Ashton and Sir Edgardo di Ravenswood, the heir of a rival family. While the two lovers exchange secret vows, Lucia’s brother Enrico, the Lord of Lammermoor, is preparing her wedding to Sir Arturo, a nobleman she has no interest in marrying. When Enrico manipulates Lucia into signing the marriage contract, the love triangle comes to a dramatic and bombastic resolution that claims all three parties’ lives. Along the way, audiences get to experience some of Donizetti’s most expressive and memorable melodies. Lucia’s arias in particular have mesmerized generations of opera connoisseurs with their wide emotional spectrum, technical demands, and sheer beauty. Her gentle aria ‘Il dolce suono’ starts out steeped in bittersweet longing for her true love, impossibly out of reach, only to transform into the blood-curdling mad scene that puts the young woman’s mental and emotional breakdown into an inimitable musical experience.

Lucia di Lammermoor is one of the brightest jewels in Donizetti’s musical crown, and Teatro Aurora in Firenze-Scandicci delivers a searing, captivating rendition of the timeless classic.