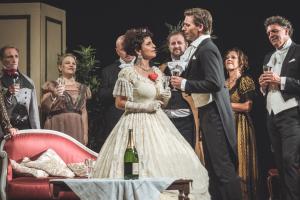 Teatro Aurora in Firenze-Scandicci asks you to raise a glass to true love with La Traviata, the evergreen masterpiece opera by Giuseppe Verdi. You will hardly find a person on this planet who cannot at least hum the famous excerpt ‘Libiamo ne’ lieti calici’, and yet this is merely the tip of the iceberg. La Traviata has been mesmerising classical music connoisseurs for centuries, yet its premiere at Teatro La Fenice in Venice on 6 March 1853 was a disaster due to a number of questionable casting choices and poor vocal performances. Thankfully, Verdi did not lose confidence in the work, and a subsequent presentation at Teatro San Benedetto on 6 May 1854 set La Traviata on a path to success and eternal life in the operatic pantheon.

Francesco Maria Piave created the libretto based on Alexandre Dumas fils’ play ‘La Dame aux camélias’, itself derived from his novel of the same name. At La Fenice’s insistence, the action was originally set in 1700, but later productions were set in the present, giving the opera a perennially contemporary feel. Musically, La Traviata is among Verdi’s finest creations. The score is closely woven into the action, and the vocal and orchestral phrasings mirror the emotions and events that unfold onstage. As the action shifts between various locations, the soundscapes reflect these changes and create an immersive, impactful atmosphere.

The plot of La Traviata focuses on the magnetic Violetta Valéry, a beautiful and fiercely independent Parisian courtesan who has a cynical view of love. Her attitude suddenly changes when she meets the young bourgeois Alfredo Germont who pursues her with an open heart. His youthful innocence and complete dedication melt the courtesan’s heart, and the pair escapes the sinful French capital to start a new life. However, soon enough Violetta’s past catches up with her, and Alfredo’s father Giorgio intervenes to burst the bubble of ephemeral happiness the couple briefly enjoyed. Will true love falter in the face of prejudice and shame? Teatro Aurora in Florence’s suburb Scandicci has the answer.