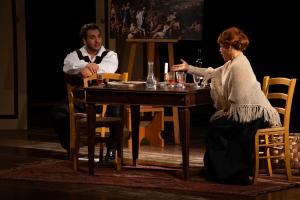 In a powerful affirmation that money cannot buy love, Giacomo Puccini crafted La Bohème. The opera about the ultimate sacrifice of two impoverished lovers whose bond proves stronger than the yearning for material riches and luxury had its premiere on 1 February 1896 at Teatro Regio in Turin. It quickly achieved popular success and became one of Puccini’s calling cards, earning regular revivals through the years. Its evergreen themes of love against the odds, financial success versus emotional happiness, and the ultimate sacrifice for the loved one’s sake pair perfectly with Puccini’s evocative and intense score. Teatro Aurora in Florence-Scandicci produces a faithful rendition of the classic opera La Bohème.

As source text, Puccini’s librettists Luigi Illica and Giuseppe Giacosa used Scènes de la vie de bohème by Henri Murger, a collection of stories that cast a playful, romanticised eye on the Bohemian lifestyle of the impoverished artists and dreamers in the Latin Quarter of Paris in the 1830s. However, the two writers produced much of the storyline themselves, only borrowing some characters and minor events from Murger’s original. At the core of La Bohème is the love story between the young poet Rodolfo and the seamstress Mimì. A colourful cast of characters around them help complete the picture of charming decadence and living for the moment that define the Bohemian lifestyle. Rodolfo and Mimì start an incendiary relationship, marred quickly by the seamstress’ failing health. In an ultimate sacrifice, the young man pushes his beloved away, so she may find a rich suitor who would be able to take better care of her. But can true love be silenced and subdued that easily?

La Bohème is known as one of Giacomo Puccini’s most direct operas, musically speaking. The melodies are often complex yet sharp and memorable, and their emotional charge often pushes them to the grandiose. Perhaps for this reason critics were not completely charmed by the opera, but audiences fell in love with it from the start. Opera lovers at Teatro Aurora in Firenze-Scandicci are in for a timeless treat.