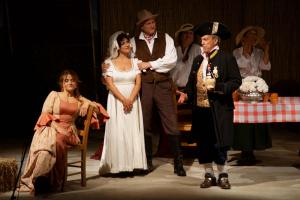 It is hard to imagine that one of the most-performed operas in the catalogue was written hastily in under six weeks. And yet, Gaetano Donizetti did not need more time to complete L’elisir d’amore, one of his crowning achievements and a timeless favourite of generations of classical music fans. The premiere took place on 12 May 1832 at Teatro della Canobbiana in Milan. Soon after, L’elisir d’amore was taking Europe and the world by storm. Teatro Aurora in Firenze-Scandicci adds another welcome revival of Donizetti’s masterwork for connoisseurs of humour, light drama, and superb music.

The Italian libretto by Felice Romani took inspiration from Eugène Scribe’s, which served as basis for the opera Le philtre by Daniel Auber the year prior to the premiere of L’elisir d’amore. In the hands of Donizetti and Romani, the storyline and accompanying music developed even more distinct Romantic style than the precursor. The plot centres on the peasant Nemorino’s love for the landowner Adina whose indifference breaks his heart day after day. The arrival of Sergeant Belcore, a military macho man, further exacerbates the situation. Desperate to awaken Adina’s love, Nemorino asks Dr Dulcamara, a traveling purveyor of quack medicine, for a magic potion that would make her return his feelings. A series of misunderstandings, a sham wedding, and numerous plot twists come next and make L’elisir d’amore a veritable rollercoaster ride, held together by Donizetti’s excellent score.

Despite the quick composition process, L’elisir d’amore abounds with memorable melodies and all-round excellent orchestration. The standout tenor aria, ‘Una furtiva lagrima’, helped propel Enrico Caruso to international fame when he first took on the role of Nemorino in 1901. Aside from that, the three different love duets between Nemorino and Adina as well as the creative and slapstick-funny basso arias of Dr Dulcamara ensure that there is never a dull moment in this classic dramma giocoso. Classical music fans in Florence-Scandicci will find the trip to Teatro Aurora well worth it for a night of music and fun.