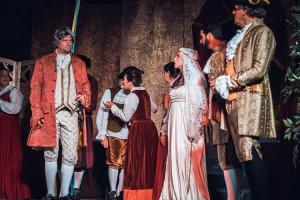 Don Giovanni is an opera that defies proper classification. Its blending of comedic, melodramatic, and almost horror elements has captivated audiences ever since its wildly successful premiere on 29 October 1787 at the Estates Theatre in Prague (then known as the National Theatre of Bohemia). The Italian libretto was the work of Lorenzo Da Ponte, a faithful collaborator of Mozart’s who was responsible for several other operatic masterpieces in the Austrian composer’s catalogue. Teatro Aurora in Firenze-Scandicci brings the laughs, gasps, and thrills of Don Giovanni to new life.

Mozart was known for having a distinct taste for provocation and salacious humour, so what better subject than the life and times of the legendary womaniser Don Juan? Thus, Don Giovanni takes the tales of the Spanish playboy, first written up by Tirso de Molina, as its source text. The titular character breaks a string of hearts, until he crosses paths with Donna Anna, the daughter of the Commendatore. An unsuccessful seduction attempt leads Don Giovanni to a deadly duel with the scorned father. The womaniser’s victory sets off a fateful chain of events that slowly but surely shift the opera’s mood from a prickly comedy towards a drama with chilling supernatural elements. Audiences at Teatro Aurora will learn Don Giovanni’s ultimate moral: good times and careless hedonism come at a very high price that invariably comes due.

Don Giovanni is one of Mozart’s highest achievements not only for its entertainment value; its score is one of the composer’s hardest and most complex, too. From the menacing overture that effortlessly evolves into an upbeat and positive allegro to the many memorable arias, duets, and ensembles, the melodies flow generously and caress the ear. The extended orchestra is working hard as well, as in the ballroom scene that closes Act I where three chamber orchestras play live on stage in perfectly synchronised cacophony. Lovers of creative and edgy opera adore Don Giovanni for a reason – and Teatro Aurora in Florence-Scandicci reminds us of it once more.