Sounds and Visions of Caravaggio 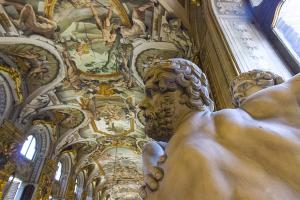 Sounds and Visions of Caravaggio is a unique twist on the usual type of visit to a historic home in Rome. Starting with a tour of the Doria Pamphilj Palace, led in English by an expert in art history, and concluding in the Jupiter Hall with a concert given by the Schola Romana Ensemble, the Palace’s resident musicians will also play and sing as you move through the Palazzo, home to one of the most significant private art collections in the whole of Europe.

The effect is an experience that brings to life the astonishing creativity of Italian art. As you contemplate some of the wonderful paintings in the Palace - works by Bernini, Raphael, Titian, to name but a few, not to forget the originals you will see by Caravaggio himself - you will hear music that was contemporary to the time in which these great artists created their masterpieces.

Using period instruments - a transverse flute, recorder, percussion, such as a hand-held tambor, and baroque guitar - and joined by their soprano singer, the Schola Romana Ensemble's repertoire offers a rare introduction to composers seldom held in today's concert halls.

They include masters of song such as Andrea Falconieri, who became the Maestro di Cappella of the Royal Chapel of Naples; Giovanni Giacomo Gastoldi, renowned for his frivolous Balletti a Cinque Voci of 1591; and Girolamo Alessandro Frescobaldi, an early composer for the keyboard whose Fiori musicali were still considered indispensable to the study of counterpoint centuries later.

With artworks you might typically expect to see only in the world’s major art galleries, and music that comes from another time and place, Sounds and Visions of Caravaggio is a vivid step back into Rome’s past. No wonder we call it The Eternal City.