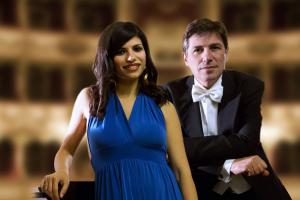 The concert Opera Greatest Hits is a wonderful addition to Rome's already colourful musical schedule. Featuring classics of Italian opera and instrumental classical music, this best-of ensemble performance in the breathtaking setting of the Methodist Church on Piazza di Ponte Sant’Angelo will take you on a musical journey you will treasure. After the concert, you can enjoy an aperitivo with the artists and get to know the people behind the music.

The Opera Greatest Hits concert covers a wide array of well-known classics in an intimate arrangement for piano and tenor and soprano voices that lets the music's inherent quality shine through. Arias and duets from opera greats like Verdi, Puccini, Rossini, or Bellini will ring between the church walls.

Exciting pieces for solo piano by masters of the instrument like Chopin and Liszt will be interspersed between the marvellous vocal performances. Apart from the well-known classical numbers, Neapolitan songs by genre leaders such as Ernesto De Curtis or Salvatore Cardillo will round off the programme and give you an exquisite taste of Italian musical greatness.

Immediately after the impressive concert, you will have the opportunity to mingle with the artists in the pleasant setting of an aperitivo, a small reception to round off your evening in a quintessentially Italian way.

The concert Opera Greatest Hits is located favourably in the Methodist Church on Piazza di Ponte Sant’Angelo, just metres away from the Castel Sant'Angelo and the legendary St. Peter's Basilica. Doors will open at 7 pm, and the concert will begin at 7:30 pm. After 75 minutes of musical magic, without intermission, the aperitivo for audience and artists will begin. After about half an hour of socialising and sharing impressions, you can wrap up your evening with a picturesque walk along the river Tiber and through the heart of Rome itself.

For your ultimate comfort, the Opera Greatest Hits concert does not have a mandatory dress code and is fully accessible for wheelchair users. In a city known for its music and pleasures, this is an event in true Roman character!