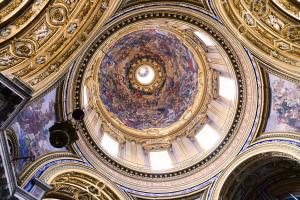 Music in Bernini’s Rome is a wonderful exploration of the art and music of the Italian Baroque, one of the most creative periods in the country’s history. The experience combines a tour in English, led by an expert guide, of the Church of Sant’Agnese in Agone (including the Borromini Sacristy) with musical performances by the talented singers and musicians of the Schola Romana Ensemble.

Gian Lorenzo Bernini, the sculptor and architect who designed the iconic colonnade of St. Peter’s Square, was called upon to complete the construction of Sant’Agnese in Agone, after those originally commissioned for the project, Girolamo Rainaldi and Francesco Borromini, had fallen out of favour with their patrons.

Situated on the Piazza Navona, the church, which was built in the second half of the seventeenth century, is dedicated to the memory of Saint Agnes, one of the earliest Christian martyrs. Its ornamentation is one of the most beautiful to adorn the interior of any church in the city.

The music is as divine as the setting it is performed in. With songs for soprano, alto and bass, accompanied on period instruments such as the baroque guitar, hand-held percussion, transverse flute and the dulcian, a precursor of the modern-day bassoon, the result is an authentic recreation of baroque music as it would have been heard in the time it was written.

Featuring some of the less well-known names of the period - Juan Arañés, Carlo Calvi, Andrea Falconieri and Cesare Negri, amongst others - as well as one of the true giants in the history of composition, Claudio Monteverdi, Music in Bernini’s Rome is a rare treat for lovers of the creative arts of the Baroque era.