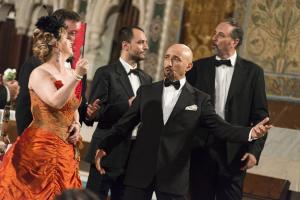 La Traviata, Giuseppe Verdi’s great melodrama, as you have never seen it before. Not simply the opera but a version that incorporates a ballet, a form of entertainment that reached its apogee in the French grand operas of the nineteenth century.

La Traviata is, in many ways, the ideal choice for such an interpretation. With much of its plot set in a Paris salon, the medium of dance provides a natural setting for the relationships between its characters to develop. The opera is also Verdi at his most acerbic, determined to show his disdain for those who would criticise his protagonist’s lifestyle while no doubt happy to indulge in the pleasures that the women she represents have to offer.

The behaviour of Verdi’s courtesan, Violetta Valéry, is in fact more honourable than any of those who surround her. When Alfredo Germont falls in love with Violetta, his father Giorgio, fearful of the harm such a match will do to his family’s reputation, implores Violetta to break off her relationship with his son.

She agrees to his demands, sacrificing her own happiness, only to be subjected to a barrage of insults from her scorned lover. Violetta flees to the country, suffering from an incurable illness while Giorgio, filled with remorse for the wrong he has done her, tells his son the real reason behind his rejection.

The story, based on La Dame aux Camélias by Alexandre Dumas fils, moved Verdi to write some of his very best music, in particular the arias he composed for Violetta as her love for Alfredo unfolds. When she sings “È strano”, “Ah, fors’è lui”, “Follie! Delirio vano è questo” and “Sempre libera”, the music and words brilliantly underline her turmoil as she struggles to come to terms with her feelings, until in “Amami Alfredo” she finally decides to give up her past life and beseeches Alfredo to love her as much as she loves him.

La Traviata, which is performed by Opera e Lirica with a full cast, chorus and orchestra, is brought to life in the idyllic setting of St. Paul’s Within the Walls. An Episcopal church that openly welcomes people from all faiths, one imagines its founders might have looked upon la Traviata with sympathy rather than criticism.

Today, La Traviata remains a compelling experience. Its message - that we should judge people on their actions rather than our assumptions of who they are - is as relevant today as when Verdi wrote it.