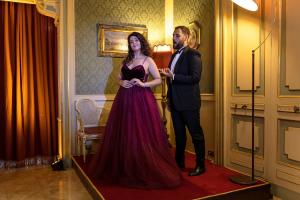 For lovers of Italian classical music and connoisseurs of opera throughout the centuries, the concert The Great Opera Arias at Salotto Barbaja of the splendid Palazzo Medici Acquaviva in Naples will deliver. A string quartet, a tenor and a soprano from the ensemble I solisti dell’Opera Lirica di Napoli put on fantastic interpretations of beloved arias and duets by maestros like Giuseppe Verdi, Giacomo Puccini, Gioachino Rossini, or Pietro Mascagni. When the singers take a break, the strings shine with renditions of the great concertos, minuets, intermezzos and other instrumental forms by Antonio Vivaldi and Luigi Boccherini. The vocalists also delight the ear with classic songs by Stanislao Gastaldon and Ernesto De Curtis. Before the concert begins, Salotto Barbaja’s impressive art collection awaits your curious gaze. You can add on top of that a drink from the palazzo’s cocktail bar. Head to the historic centre of Naples for an evening of Italian art and opera!

The programme of the concert The Great Opera Arias takes audiences on a trip through all significant periods of Italian classical music. It goes all the way to old maestros, like Vivaldi with ‘Spring’, ‘Summer’, and ‘Winter’ from his timeless collection of string concerts The Four Seasons, Benedetto Marcello with his ‘Adagio in C-Minor’, and Boccherini with his famous ‘Minuetto’ for a string quartet. Rossini’s ‘Galop’ from Wilhelm Tell and Mascagni’s ‘Intermezzo’ from Cavalleria rusticana build a bridge towards opera territory already and prepares the ground for the evening’s beautiful arias and duets. Puccini makes a strong showing with ‘Quando m’en vo’ from La Bohème, ‘E lucevan le stelle’ from Tosca, ‘O mio babbino caro’ from Gianni Schicchi, and ‘Nessun dorma’ from Turandot. Verdi’s Rigoletto features prominently with ‘Bella figlia dell’Amore’.

Not exclusively focused on arias, the concert also features two landmark Italian songs. ‘Musica proibita’ by Gastaldon is one of the most popular tunes in the Italian language, rivalled only by Neapolitan songs like ‘Torna a Surriento’ by De Curtis. Taken together, the numbers that make up The Great Opera Arias in the heart of Naples paint a wondrous picture of Italian musical talent in the luxurious atmosphere of the palazzo’s Salotto Barbaja.