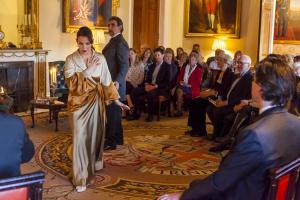 Opera is among the most grandiose of the performing arts: a large orchestra supports a cast of powerful singers in costume who move about a richly decorated stage and sing melodies with high emotional charge. It is easy to attribute opera’s impact to this grandness and to see it in this stereotypical fashion. La Traviata a Palazzo breaks that mould into pieces and demonstrates how this genre can be just as powerful in an intimate setting and a toned-down musical arrangement. Staging one of Giuseppe Verdi’s signature operas at the beautiful Palazzo Medici Acquaviva in Naples offers a unique artistic experience that has to be seen to be believed.

La Traviata a Palazzo makes the most of its exclusive venue: the opera performance moves through several salons of Naples’s most celebrated palace on the historic Via Toledo. To facilitate that, this special performance allows a maximum of 40 guests – a truly unique opportunity to experience La Traviata from up close as a full cast backed by an ensemble of strings and piano blazes through Verdi’s powerful score. An intermission with Italian prosecco and non-alcoholic drinks makes the enjoyment complete and rounds off the performance to approximately two hours.

The opulent backdrop of Palazzo Medici Acquaviva is the perfect setting for La Traviata, the story of the gorgeous, intelligent and cynical Parisian courtesan Violetta Valéry and her encounter with the young bourgeois Alfredo Germont that turns her worldview around. As their love deepens, the patriarch Giorgio Germont interferes and puts the pair’s newly grown bond to the test. As the action moves across the beautiful salons of the palazzo, so does the mood and outlook of the opera change with every scene.